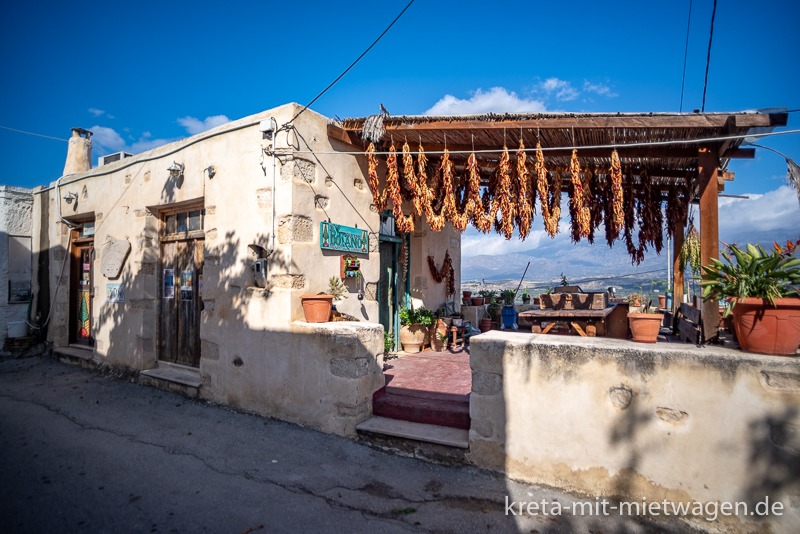 Botano in Kouses, probably the most famous herb shop in Crete

A beautiful excursion day, especially for travellers from the northern regions of our favourite island Crete.

We start with the actual excursion in Górtys, the arrival from the north is best from the western end of Heraklion.

There you take the turnoff from the “New Road” towards Mires, Agia Galini.

One is quickly out of the urban hustle and bustle of the capital and finds oneself on the (initially well developed) expressway to the south, in the direction of Messará plain. The route leads first through gently rolling vineyards and then through the eastern foothills of the Psiloritis Mountains towards Agia Varvára.

Before reaching Agia Varvára do not take the new road to Messara / Mires, but continue towards Agia Varvára town centre.

Here, in what seems to be the longest village on the island, there are, apart from many cabbages, several shops selling traditional Cretan clothes. 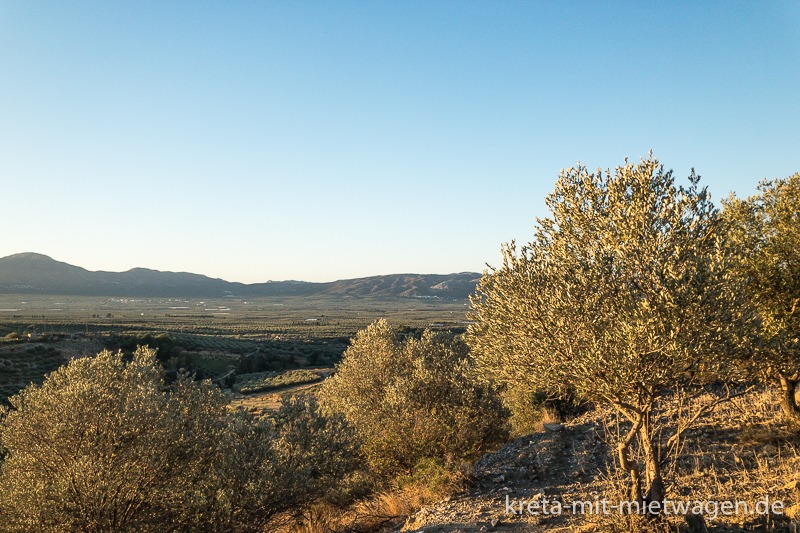 A few bends behind the village you have the first beautiful view of the Messará plain. It stretches like a huge green stream from the centre of the island towards the Libyan sea. The plain is bordered in the south by the Asteroussia mountains and in the north by the Psiloritis massif.

When we arrive at the “bottom” we reach the place Agii Déka, translated the ten saints. The name comes from ten Christian martyrs who were allegedly beheaded there in the 3rd century AD because of their faith.

Shortly after the place we reach the first destination of today, one of the most interesting excavations on the island, the ancient city of Górtys, also called Gortyna. 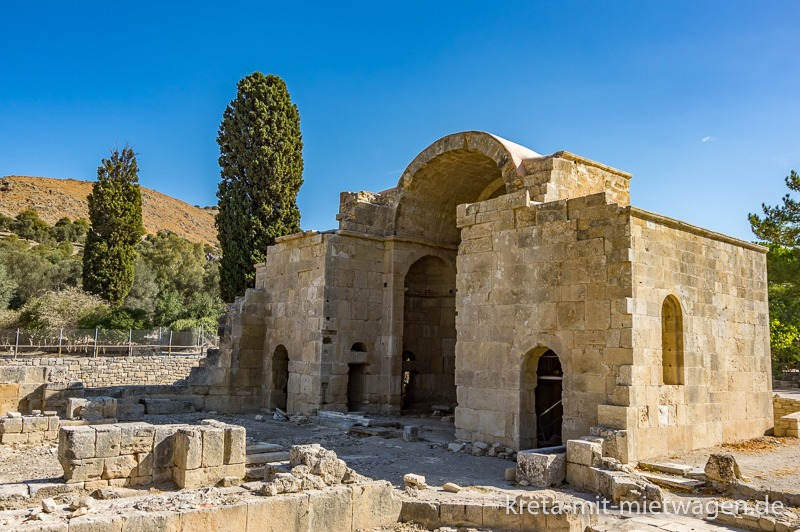 On the right side of the street you will find the official part of the excavation, here you have to pay the entrance fee. For this, one gets to see, among other things, the impressive Titus Basilica and an exhibition with wonderfully finely worked Roman marble statues. In the Odeion, a very well preserved Roman theatre from the 1st century A.D., there is the “Codex of Gortys” at the north wall, the oldest legal text of Europe. 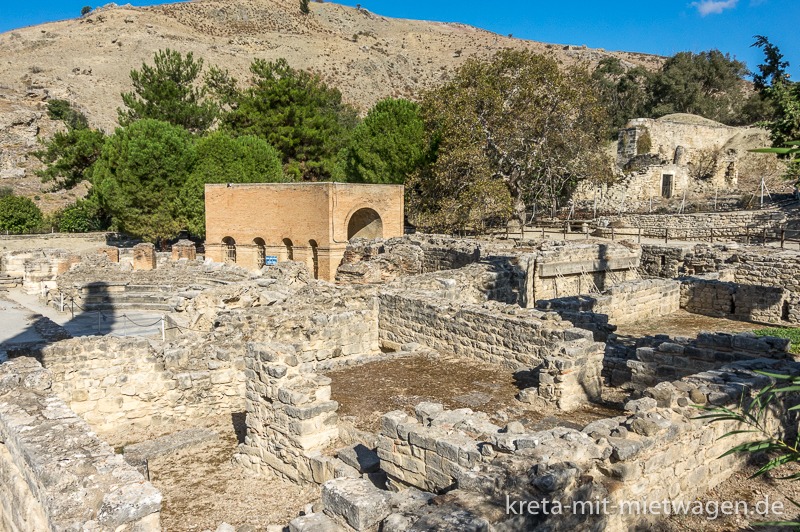 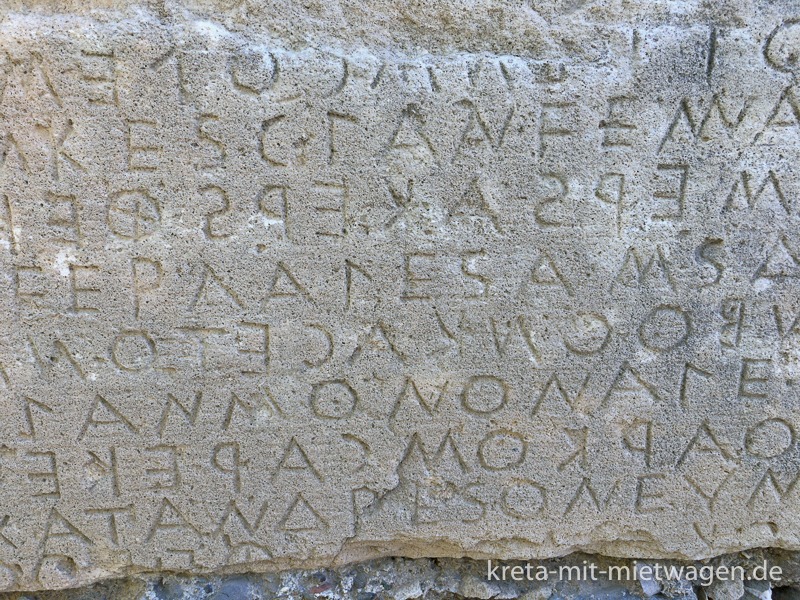 At least as interesting is the southern part of the excavation on the other side of the road. Here one moves freely through olive groves, in which ancient fragments such as wall and column remains, but also entire temples, such as the ruins of an Apollo temple and a temple for the Egyptian gods. 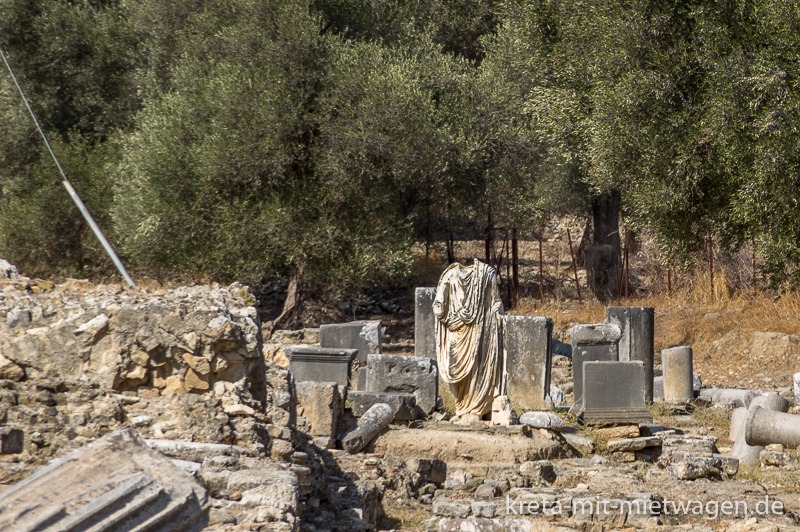 Also the “Headless” can be found here, a male, Roman statue with beautiful folds, but without head. This part of the excavation is especially interesting for families with children, because the old olive tree population always provides some shade in summer and you can organize a “rubble rally” with the children. 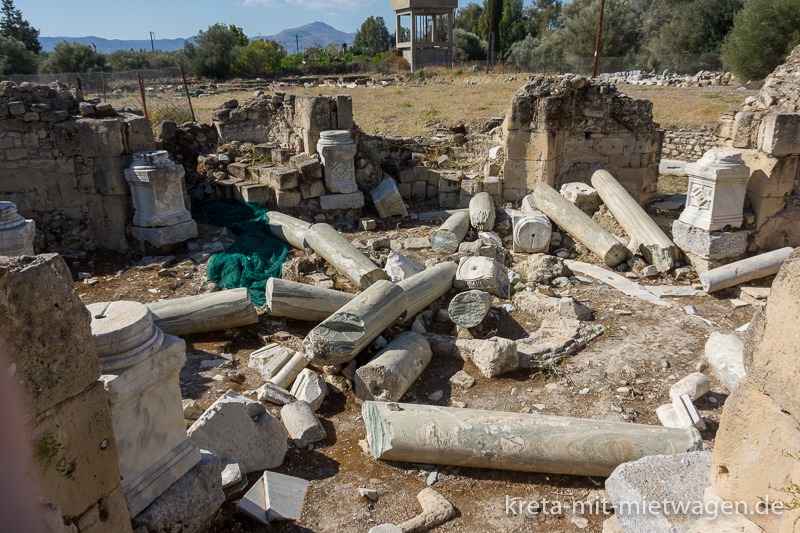 We continue through the typical Cretan small town of Mires, where a nice weekly market (see here) takes place on Saturday mornings, and Petrokefáli to Kousés. 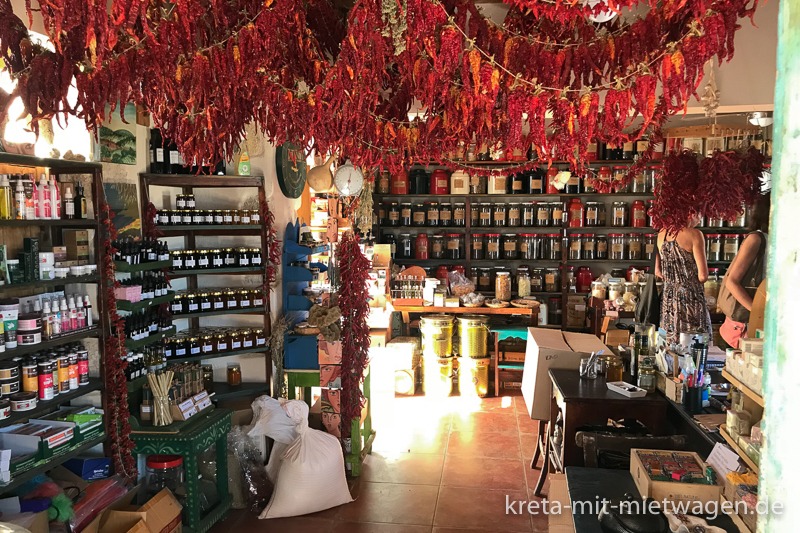 Botano – Interior view of the famous herb shop in Kouses

In this picturesque village you will find Bótano, probably the most famous herb shop on the island. Here you can buy, in a wonderful atmosphere, the typical Cretan herbal teas such as the Greek mountain tea, as well as many other different tea mixtures and spices, partly still from own production. 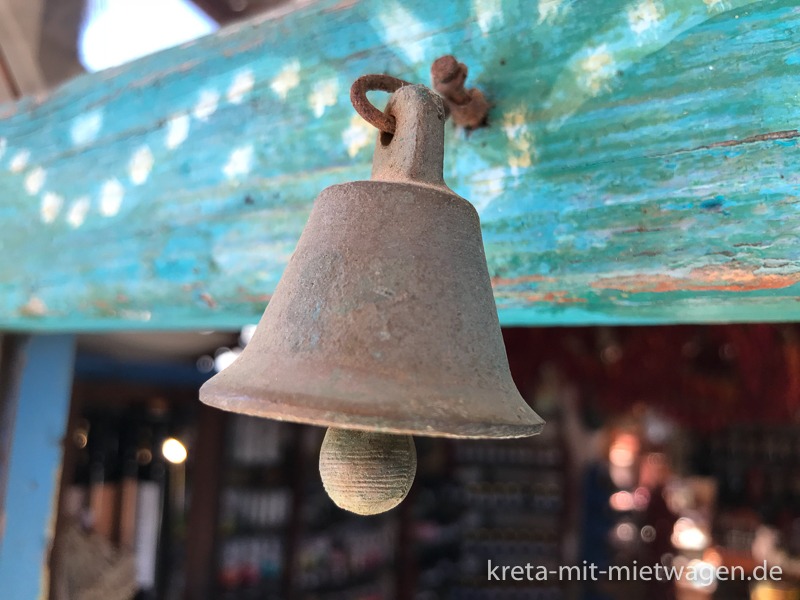 Under the ceiling of the shop garlands stretch out to dry spice peppers and in several niches of the ceiling swallows breed in spring. In one corner of the shop you can try different teas for free and then step onto a panoramic terrace with your tea cup, from where you have a wonderful view over the plain to the sea. 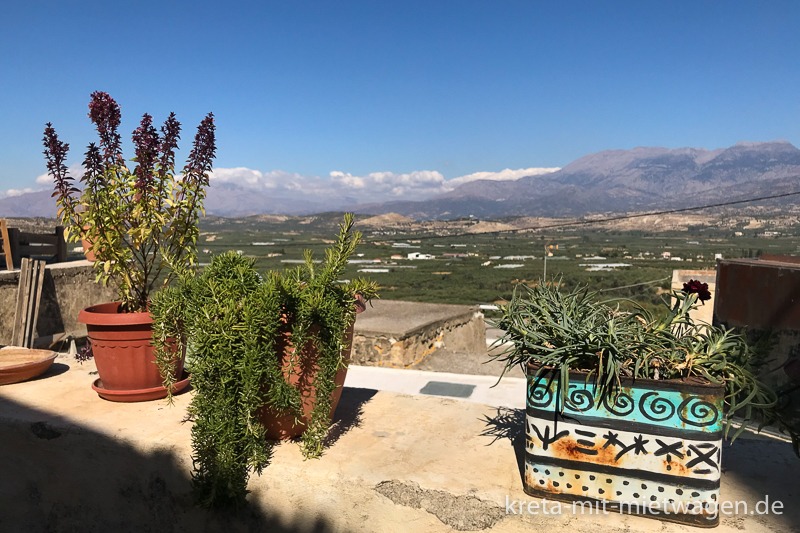 A short walk through the village is well worth it and is rewarded with pretty views and details. 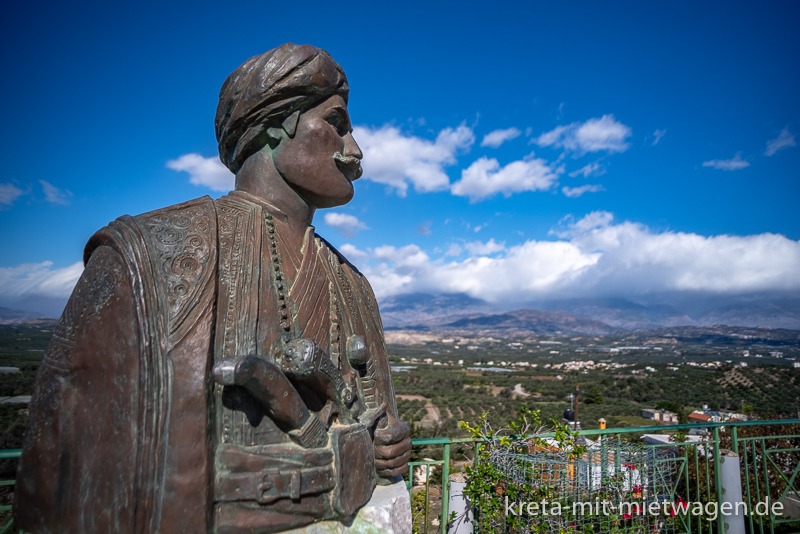 From Kousés you reach Sivas via a narrow country road, a somewhat larger village with a beautiful plateía. Here you will find some good taverns that are recommended for lunch and a very nice pottery where you can buy very nice handmade souvenirs at reasonable prices. 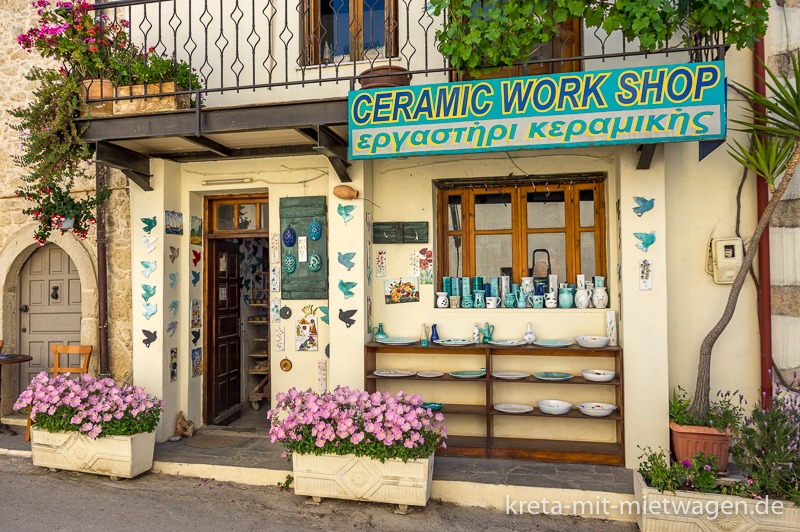 The pottery in Sivas 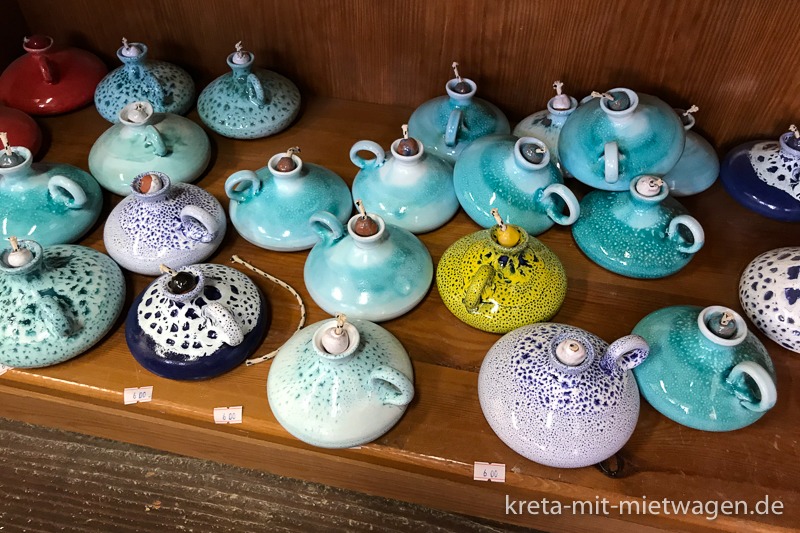 The pottery in Sivas

Those who only want a small refreshment in Sivas should definitely visit Kostas Kafenion and drink something under the pepper tree. And don’t forget to look inside, a gem with a lovely host! 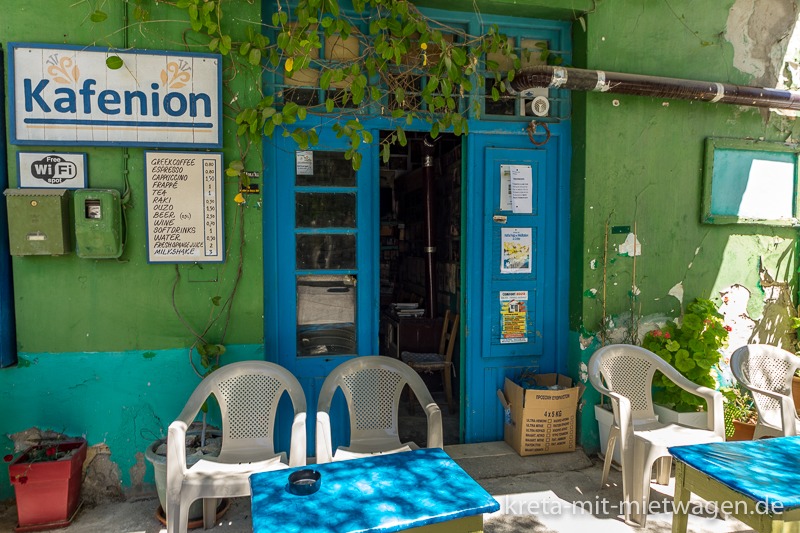 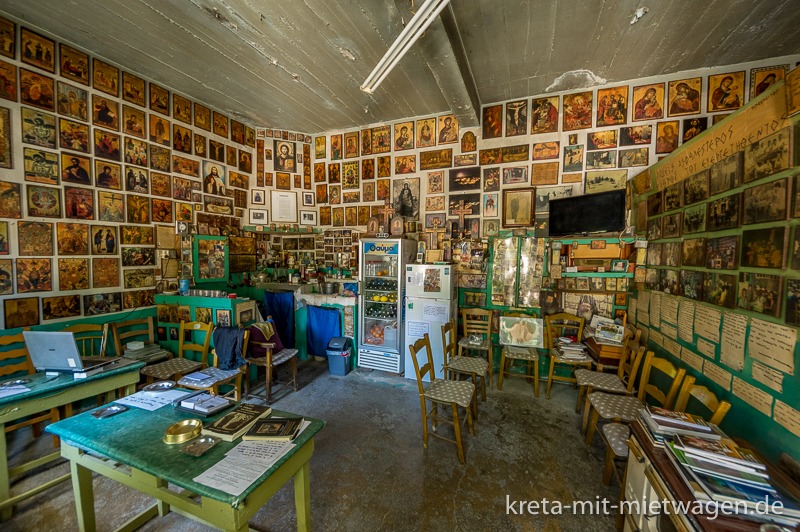 Depending on how much time the trip has taken so far, you can now drive up from Sivas via Listaros to the beautiful monastery of Odigitrias, which can of course be visited. 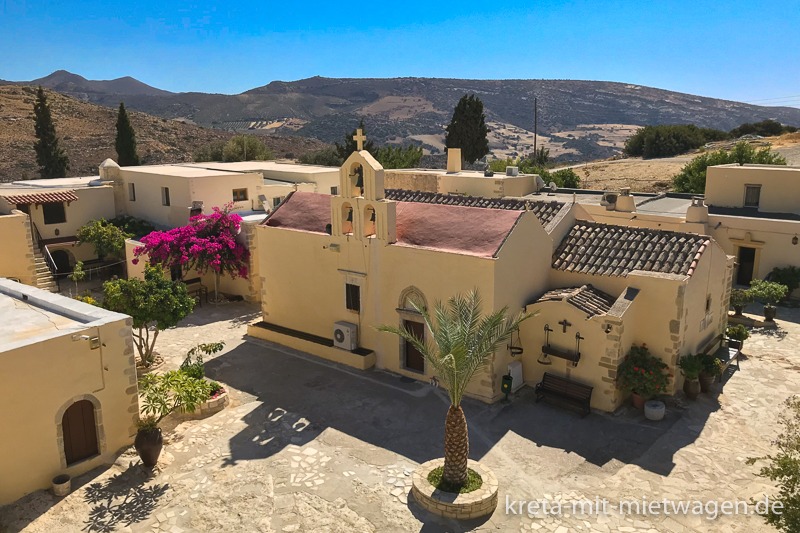 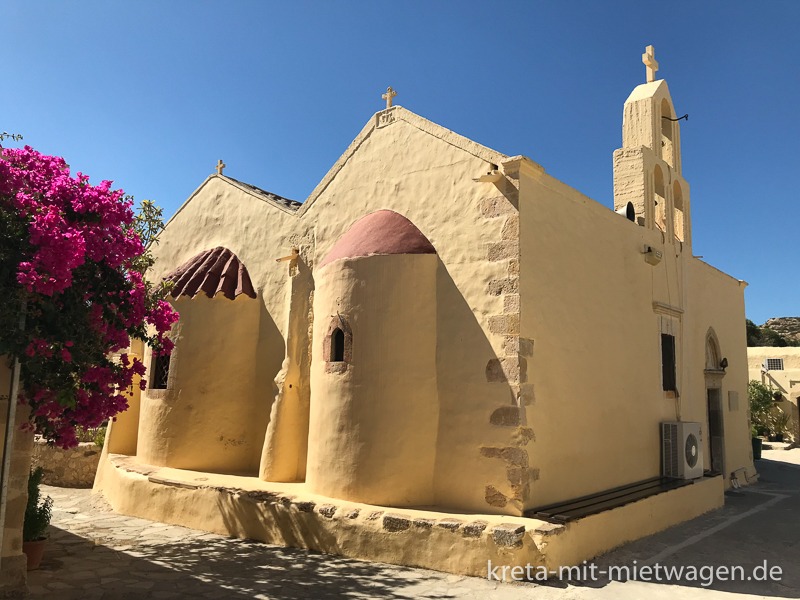 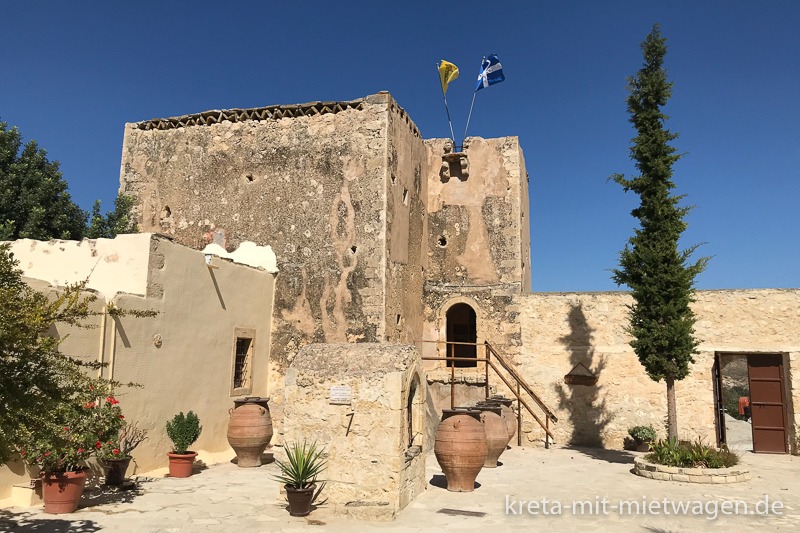 Now off to the water. From Sivas there are two different places to swim. 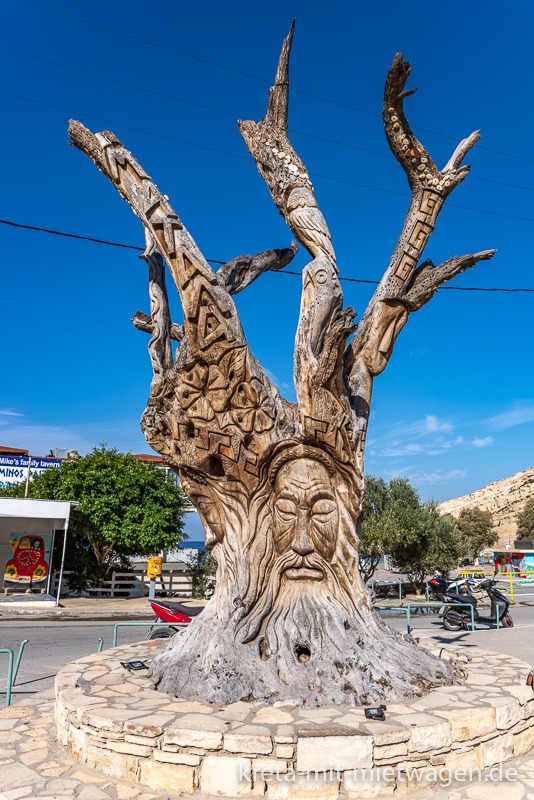 Deadwood with carving in Matala

Either Mátala with its famous caves, a lot of day tourists (including a paid parking lot) and its artificial hippie flair or, much quieter and more tranquil, Kalamaki. 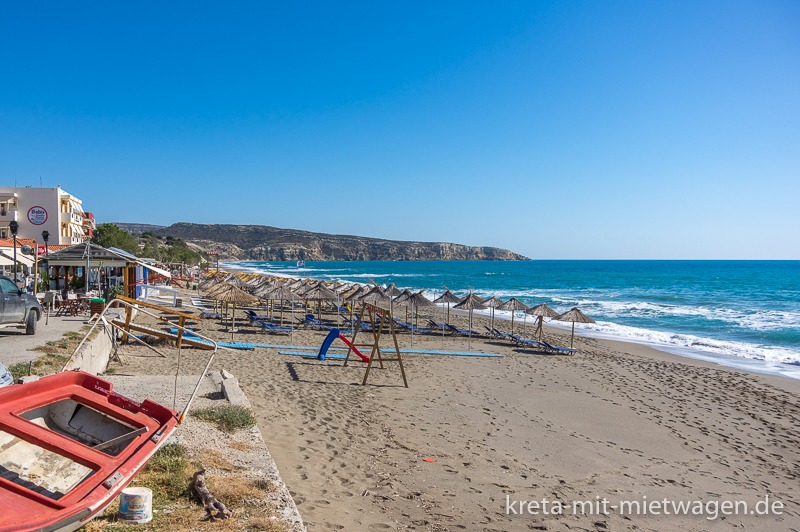 Here in Kalamaki, the famous Kommos Beach, about 3 kilometres long, begins. In Kalamaki, there is a small promenade with several good to very good taverns and cafés, all of which also offer sunbeds on the beach and fresh water showers. Where one eats something, one can even use the beach infrastructure for free. 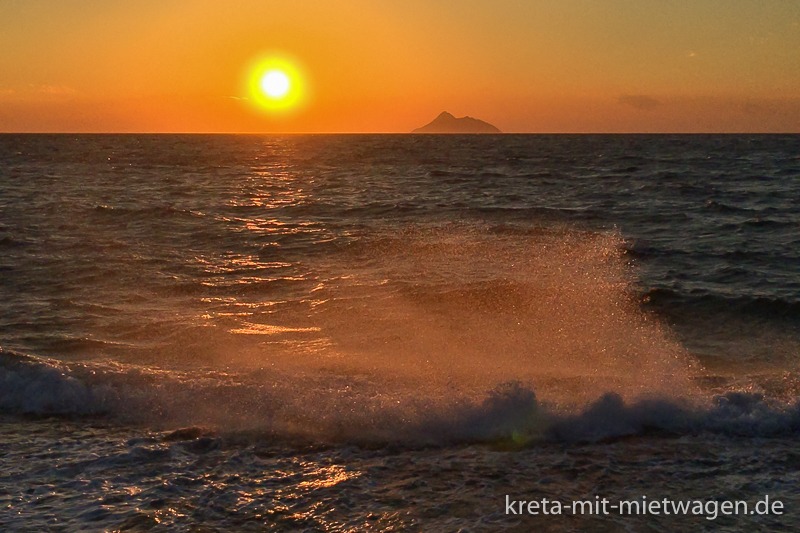 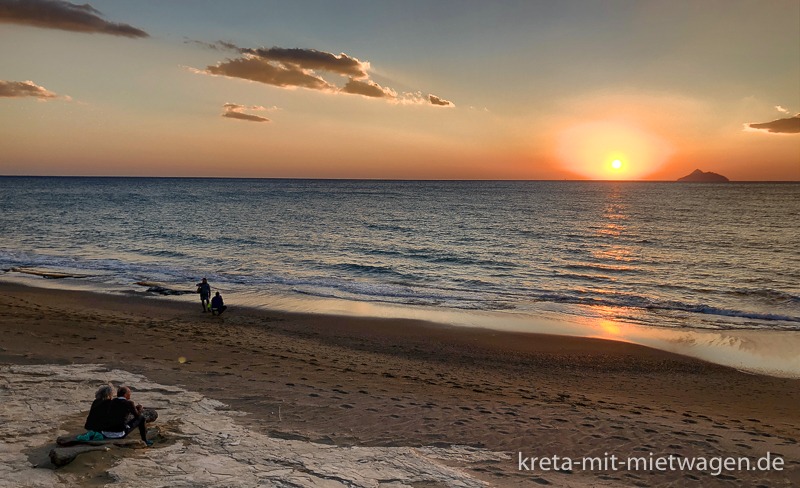 Those who do not have it too far home should have a look at the sunset in Kalamaki that can be really fantastic depending on the daily form, otherwise the excursion to the central south of Crete ends here. In another article we describe an alternative excursion in the area with other destinations.

Of course these components can also be combined differently, here the creativity of the reader is required. ;-)